Tanzanite Items in stock here, We can help you find the ideal gem & custom make anything. Value Assured

Tanzanite is the accepted birthstone for December, it is also known Zoisite & comes in a variety of colours, sizes,  shapes & value’s

Since a Maasai tribesman stumbled upon a shimmering blue crystal in the foothills of Tanzania’s Mount Kilimanjaro in 1967, tanzanite has become one of the world’s most cherished and sought-after gemstones.

It is no wonder. With its symphony of exquisite royal blue, lilac, periwinkle hues, & burgundy flashes and supply of the gemstone likely to last just a single generation, tanzanite has captured the imagination of the world’s most beautiful people, and earned its rightful place next to diamonds as a must-have gemstone.

The world’s only known source of tanzanite occurs beneath the sweeping grasslands in the foothills of Mount Kilimanjaro in northern Tanzania, East Africa. Spawned during the Pan-African Event, when massive geological activity ripped Africa from India and set Asia adrift from North America, tanzanite’s geology is so unique that it has been described as a geological phenomenon.

This geology is rendered even more phenomenal by the fact that the source is limited to a single generation. Those fortunate enough to already own tanzanite, and those who acquire it in the next decade or so will be the only first-time owners. Thereafter, it will become a precious heirloom.

In addition to rendering tanzanite 1000 times rarer than diamonds, this unparalleled scarcity has earned  its own unique place in the gemstone hierarchy.

Indeed, its range of unique shades – vibrant, individual and youthful – gives it a strong, immediately recognizable identity, and contributes to its special positioning in both the gemstone and fine jewelry markets.

In geological terms, tanzanite is trichroic. This means that in its rough form it radiates three different colors from each of its crystallographic axes, namely blue, violet and burgundy. Once cut and polished, the stone becomes a kaleidoscope of royal blue, violet, indigo, lilac and periwinkle shades. Different hues appeal to different tastes. Larger stones tend to exhibit more intense color, fire and brilliance, and rich colour’s  typically command the highest price.

Demand among the world’s jewelry designers and manufacturers is growing as knowledge of its exquisite color and diminishing source spreads.

for more information  contact us. or visit tanzanite foundation 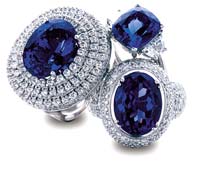